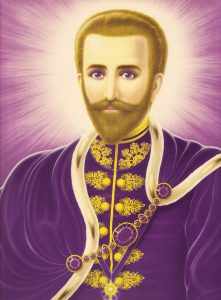 The sponsor of the New Paradigm MDT system is the ascended master Germain. His objective was to bring back some of the healing arts of the Atlantean age. He was not sure how humanity would respond to the system, the energies and the inherent invitation these energies bring to move towards wholeness and freeing the mind. With Reiki he gave humankind a small taste of the energies available to see how things would develop.

The next phase in the plan was to bring in the system now known under the name of New Paradigm Multi-Dimensional Transformation. To make this possible it was again necessary to work together with someone living in the 3rd dimensional plane to ground in the energies and system and make it available for the rest of humanity and Earth as a whole. The person Germain chose to work with is John Armitage also known as Hari Baba.

Once John Armitage could be brought to agree to take on the project the first workshop was given in 1994 on the British island of Jersey.

Initially Germain chose to call the system Shamballa Reiki since that system was using some of the original energies/symbols of his Atlantean system. However fairly soon it became clear that it was incorrect to use this name as the energy of Shamballa is not Reiki and Reiki is not Shamballa. He started out presenting Shamballa in a similar way to working with Reiki using symbols and grades or levels of initiation. It became clear that both the symbols and the grades or levels had a limiting effect on the energies, the practitioners and the workshops themselves.

The energies were living, breathing and free; growing and evolving. The way of working with them, sharing the energies in workshops and energy healing sessions needed to mirror this. A new approach was found and thus also the  Basic Master Healer and Teacher workshops were set up. These had in fact been preceded by the 13D Master Healer and Teacher workshops which proved so revolutionary and far reaching in impact and effect that they inspired the set up of the Basic workshops.

More and more we experience the living growing and evolving nature of the Shamballa energy which is reflected in the explosive growth and spread of the system worldwide. In 2012 a new development necessitated. The new name, New Paradigm Multi Dimensional Transformation (MDT), also more accurately reflects the true nature and purpose of this system.

LOVE WITHOUT CONDITIONS & FREEDOM:  The central core of this energy is Love, Love and Freedom. Love for oneself and an innate knowingness of one’s connection with Mother / Father God and all Creation. Freedom from all that stands in the way of that knowingness. Freedom to know who you are, and to step into your Power, to step into your Mastery.

RELEASE OLD ENERGIES: In one of our classes you will experience meditations designed to help you to clear away the old emotional debris you have been carrying around through lifetimes. Then you will be activated with these multidimensional transformational energies, which come from Mother / Father Source through Master Germain and the other Multidimensional Masters, so that you may use these energies whenever you will.

EXPAND AND EVOLVE: The main purpose of these clearings and activations are for your own evolutionary development. As you evolve, you make it easier for the rest of humanity to do so as well. You help the collective consciousness of humanity to expand and grow into the consciousness of Love. As a by-product, you may call upon these energies to help facilitate healing (bringing back into balance), both your own physlical / emotional / mental / spiritual systems and those of others. The ascended Master Germain assures us that these energies are now part of an energetic gridwork around the Earth, which we may call upon easily at any time.

ATLANTEAN ROOTS: The origins of this system lie way back in pre-history. Master Germain was incarnate in Atlantis at the time. He brought through from Source and the Universe the original system in order to help in the evolution of low vibrational beings that were being used as slaves. He wanted to make this slavery unacceptable and to free these beings from their bondage of ignorance. The system today is much expanded, for we are ready for much higher energies now, but its purpose is similar–-to free us from our bondage of ignorance, to bring us into the Love and Freedom of our own mastery. What does it mean to be a Master? It does not mean power over others. It simply means being a Master of oneself, as any true Master will tell you.WHAT IS THIS ENERGY? No less than the collective consciousness of the Ascended and Galactic Masters. This resonance is now available to us, as we open the crystalline energy matrices within our energy fields to receive it. This “Diamond Frequency” is a highly-refined and extremely transformational frequency and also a very powerful healing energy. Activations to this frequency allow us access to the new codings which are being downloaded through the Galactic Centers, to stabilize and harmonize humanity’s and the Earth’s harmonics to become One Unified Harmonic. Receiving the new codings and operating within the Diamond Frequency will mean increased multi-dimensional awareness, and eventually developing clairvoyance, clairaudience, clairsentience, and the other multidimensional senses that we have forgotten about but are our birthright as children of Mother / Father Source.

“NOW is the time to release all unnecessary programs from the past and to prepare to receive the new energies coming in. We are co-creating here on Earth things beyond our imagination. You are invited to be present in each and every moment, and to enjoy the dance through to the end of time.

“To access this energy after your activation, you just call it in by saying, “Shamballa ON!” You don’t need to switch it off; the energy knows when the work is done.  No complicated left-brain shenanigans to help convince you that you can’t or aren’t worthy or such rubbish. Such thoughts and feelings have no place in the lives of you who are stepping into the mastery of Love. I Germain congratulate each and every one of you, as do the Galactic Masters, on your focus, bravery, fearlessness, and we encourage you to step forward with that energy and become YOU.” —Master Germain through Hari Das Baba / John Armitage